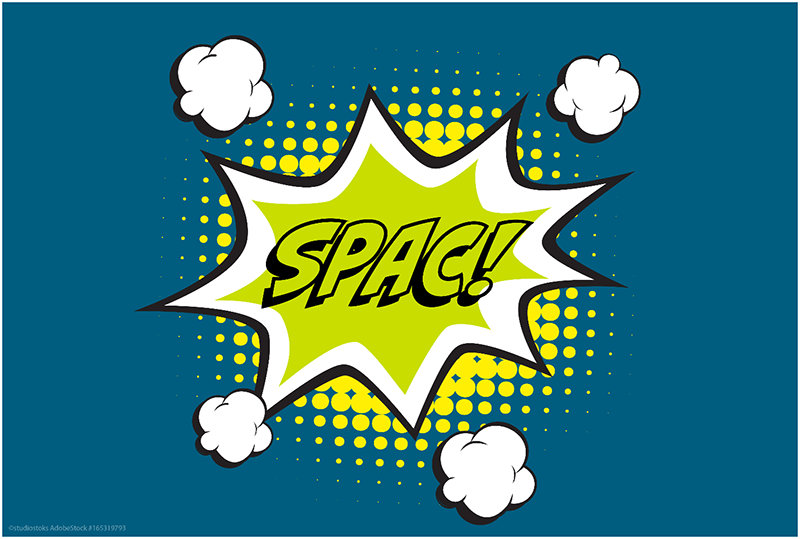 I know a lot of you watch a lot of business news networks. Whether it be Fox, CNBC or Bloomberg, you’ve undoubtedly heard the term SPAC. It’s the new hot topic. It stands for “Special Purpose Acquisition Companies”. Although these types of investment vehicles have been around for decades, there has been an explosion of them in the past 12-24 months, and the expectations are that there will be many more in the next 12 months, therefore I think it’s worthy of our focus this week, to give an overview and my thoughts on the topic.

The best part about my job is that it’s ever changing. Every morning you could wake up and face a story, an event, a circumstance that will dominate the headlines and be the banner on every network. SPACs are that topic for now. For the past few weeks, some CEO is being interviewed on one of the networks discussing why a SPAC was the right funding option for his/her company. There is national exposure bought to the transaction and adds fuel to the SPAC fire. The networks love discussing SPACs, because it pits many of Wall Street’s most famous against each other.

Hedge Fund manager Bill Ackman and former Facebook Executive and now Wall Street’s most interviewed investor Chamath Palihapitiya are proponents, while Jim Cramer CNBC’s long-time host thinks “they are a way for celebrities to cash in on their brand”.

Let’s dig a little deeper. A SPAC by nature is a “shell” company that is put together by a manager (known as sponsors) for the sole purpose of raising capital. A capital raise is done through the normal IPO (Initial Public Offering) process. What’s not usual about this process is that the capital is raised without any knowledge of what the capital will be used for in the future. Investors in SPACs are making a bet that the “sponsor” will deploy the funds in a way that makes money for the original investor. Thus, they are known on the street as Blank Check Companies.

Investments in SPACs are usually done through buying shares at the IPO, at a price of $10. In addition, most investors receive a warrant, which is essentially a promise to be able to buy more shares later at a pre-determined price. When the capital is raised, the sponsors usually have two years to deploy the capital or if no deal eventuates the money is returned to shareholders. Because SPACs are usually looking to acquire growth orientated private companies, they appeal to some investors who are looking to put their capital in a company early, angel investing. Why not leverage the experience of a Wall Street titan like Ackman or Palihapitiya? Well stay tuned.

Why would a private company choose to go with a SPAC rather than a traditional IPO? The traditional IPO process can be a long and daunting one. There are many regulatory hoops to jump through, scrutiny of its financial statements, the hiring of an investment bank, as well as road shows and investor meetings all of which can take many months or in some cases years. In some cases, the private company is looking to leverage the experience of the sponsor or become part of a vertical integration system. Think about a part manufacturer being acquired by the company that gives them access to other markets, essentially guaranteeing them increased business.

As for the sponsors, the obvious benefit is that they can use other people’s money to go out and acquire businesses. In addition to the two names I mentioned above, sports celebrities like Shaquille O’Neil & Alex Rodriguez added their brand to acquire funds as well as politicians like Paul Ryan, former Commerce Secretary Wilbur Ross, and CNBC Commentator and Trump Economic Advisor Larry Kudlow are associated with starting SPACs, and no they don’t do it for free. Sponsors are generally compensated by getting 20% of the SPAC at a substantially discounted price. In the case of Palihapitiya, he was able to acquire 20% at $0.002 per share compared to the investors at the IPO who paid $10.00 per share.

After the IPO, SPACs trade on the exchange just like any other security. Some are priced above their $10 IPO price, but the majority are below, according to a study by the Financial Times last year. A study by Goldman Sachs of 56 mergers/acquisitions by SPACs showed that they underperform the S&P 500 during the 3,6- & 12-month period following the IPO.

It’s not the mediocre returns of these SPACs that are concerning to me, it’s the blind trust, and lack of transparency. In addition, I believe it has the capacity to inflate prices far beyond what company fundamentals would normally allow. As someone who is responsible for other people’s money, investing with blind trust is just not something I can fathom. Yes, I acknowledge that some of these SPACs will likely be highly successful and may produce the next big innovation. However, many I fear will just be another way for the those with means and access to take 20% from the little guy.

I’ll give the last word to Cramer on this one, “It feels like an inside joke for the super-rich.”

With that here is the buy/sell.

PrevHow much longer will it last?
NextWhat’s Been WorkingNext